One damp Friday morning, enthusiastic volunteers disperse free copies of ‘Verdens Bedste Nyheder’, to sleepy commuters. With bright eyes, and wide smiles, the volunteers counteract the dour mood of passer-bys on their way to work. There is a sense of affirmed positivity around the work they are committed to. This annual event, in which volunteers across the whole of Denmark distribute a copy of the paper and a chocolate, in early September, is emblematic of the realm of journalism that ‘Verdens Bedste Nyheder’ expresses, constructive journalism.

Although constructive journalism is a relatively new concept, it is rooted in social responsibility theory. The theory started from Europe and took shape with the Commission on the Freedom of Press that occurred in the US in 1949. The theory is taken to be for the people and society. This requires the press is to make a code of conduct and to develop a standard within journalism, to improve upon the domain. This way, the facts provided by the press are analysed and interpreted so that the people get true information and understandable news. This, supposedly, helps maintain social harmony by revealing social evils like corruption and discouraging other bad conducts (McIntyre & Gyldensted, 2017).

Since the social responsibility theory of the press was established, various forms of journalism have expressed a commitment to society’s well-being. Constructive journalism is one of these, along with other domains such as civic journalism. These approaches require journalists to take a more active, participatory approach.

Within Scandinavia the domain has been evolving since 2007. In December 2007 the editor-in-chief and CEO of Danish Media corporation Berlingske Media, Lisbeth Knudsen, wrote an editorial where she reflected on the natural but also detrimental effects of journalism’s negativity bias, and called for more positive and constructive story ideas. Since, other Scandinavian media and broadcasting organisations have worked with constructive journalism in their news department, such as Danish Broadcaster TV2 News, who have launched a special format they have coined ‘Yes We can Stories’ in their nightly news format.

Verdens Bedste Nyheder began in 2010 as an awareness campaign. Backing the initiative was the Danish International Development Cooperation (DANIDA), and the UN. The purpose of the campaign was to inform the Danes in a simple and constructive manner about global progress, the UN’s Millennium Development Goals, and Danish development cooperation. By 2016, Verdens Bedste Nyheder was founded as an independent association of actors from different areas: the UN, the Danish development organizations and the private sector. It is a non-profit organization, and the funds come primarily from Danida, membership contributions, EU funds, and private contributions.

Verdens Bedste Nyheder use constructive journalism to write news stories on global development. They regularly publish news on their website, as well as Facebook, Twitter, and Instagram. Every Friday you can read the articles in the free newspaper MetroXpress. Every week, they also deliver three ultra-short news telegrams that are displayed on the info screens of the Copenhagen commuter trains.

Additionally, every year, a morning in September, this year Friday 7th, Verdens Bedste Nyheder greets the whole of Denmark with a newspaper telling about progress and solutions to the challenges of the planet. Verdens bedste morgen, brings in thousands of volunteers at stations and street corners throughout the country to say good morning to people on the go, with a copy of Verdens Bedste Nyheder.

The Constructive Journalism Project’s core services include delivering training programmes, providing consultancy to media organisations, and supporting research and education regarding the impact of journalism.

When meeting with the Director of Verdens Bedste Nyheder, Thomas Ravn Pedersen, he reflected on the origins of the organization, and his own journalistic convictions, implying that constructive journalism and Verdens Bedste Nyheder was not motivated entirely by only reporting positive news. Constructive journalism is more inherently interesting in reporting factually correct news and subverting over-hyped sensationalised negative news.

Hans Rosling, in his book ‘Factfulness: Ten Reasons We’re Wrong About the World – and Why Things are Better Than You Think’, suggests the majority of human beings are wrong about the state of the world (Rosling, 2018). He states that most people think the world is poorer, less healthy, and more dangerous than it is.

A key proponent of Rosling’s approach is Bill Gates. Gates states that “If you don’t believe the world has improved, you’re more likely to look at tragedy and think nothing can be done.”

Crucial to Rosling’s arguments is the perceived frameworks for how we think about the world. Specifically, Rosling critiques the widely used framework of dividing the world into ‘developing’ and developed’. Rosling describes these as ‘outdated’ and ‘meaningless’. Rosling offers a new framework for how to think about the world. He proposes four income groups, with the largest number of people living on level 2.

The reason this is so important to global development perceptions, is because it is hard to pick up on progress if you divide the world into rich countries and poor countries. When those are the only two options, you’re more likely to think that anyone who doesn’t have a certain quality of life is ‘poor’.

The bulk of the book is devoted to ten instincts that keep us from seeing the world factfully. These range from the fear instinct (we pay more attention to scary things) to the size instinct (standalone numbers often look more impressive than they really are) to the gap instinct (most people fall between two extremes).

Rosling’s book outlines how, with rare exceptions, most of the miracles of humankind are long-term, constructed things. Progress comes bit by bit. We’ve cut the number of people living in extreme poverty by half over the last twenty years, but there was never a morning when “Poverty Rates Drop Incrementally” dominated newspaper headlines (Gates, 2018).

Evidently, applicants of constructive journalism would argue that the domain is not solely focused upon spinning news in a positive slant, but representing the world in a factually accurate framework, with Rosling’s ideas central to this.

There are also a number of techniques by which constructive journalism can be practiced and the theory-based psychological frameworks that support their use. These techniques can be applied to several stages of the news process, including story generation, information gathering, and production, and some news organizations are already applying them.

Gyldensted (2017) supposes that journalists who wish to work more constructively should aim for more balanced coverage in terms of positive and negative events and information. The positive psychology concept refers to the so-called well-being model of the world. Positive psychology scholars generally refer to the world of well-being as what they seek to uncover, explore and measure. The well-being model of the world contrasts with the disease model of the world, which is made up of negative matters such as negative emotions, bad relationships, conflict, dissent, post-traumatic stress, and victimizing. Contrarily, the well-being model of the world is made up of positive matters such as accomplishment, growth, meaning, good relationships, engagement, positive emotions, post-traumatic growth, and resilience. Accordingly, reporters traditionally focus on items that represent the disease model, and in doing so they misrepresent the world by inducing prejudice through their choice of questions.

McIntyre’s 2015 study found that evoking positive emotions in news stories can minimize harm by causing individuals to feel positive and intend to engage in pro-social behaviours. Including effective solution information can also cause readers to feel more positive, in general and about the news article.  However, as Mcintyre outlines, to make robust claims about the effectiveness of more constructive news stories, more academic work is needed.

McIntyre’s research did, however, find that there was no clear relationship between solutions based information and reader’s behaviour. However, this could have been to do with the story topic. This means that journalists can leave their audiences feeling positive by writing solutions-focused stories, but although these stories might leave readers feeling good, they might not inspire action. Therefore, reporters should think critically about the goals of their stories. If a story is meant to leave readers feeling satisfied so they will have positive attitudes about the story, a solution-based story could be effective. But if a story is meant to leave readers feeling satisfied in order to provoke action, a solution-based story might not be the most effective angle. Nevertheless, more academic attention and research needs to be conducted before robust claims can be made about the impact of solution-focused news stories.

Taking constructive journalism forward, practitioners of both international development and journalism should come to the understanding of the role of affect in journalistic storytelling. With constructive journalism in mind, media professionals remain committed to journalism’s core functions, whilst leaving their audiences feeling positive because positive emotions cause people to feel energized, open, optimistic and ready to engage. More specifically, research from scholars such as McIntyre (2015) revealed that reporters should include information that causes individuals to feel happy, hopeful, proud joyful, and elevated. Reporters can, and should, do this even (or especially) if the topic of the news story is inherently negative. This means reporters need to generate story angles, ask questions and choose information and quotes that evoke positive emotions.

With the domain of constructive journalism on the rise, specifically within Scandinavia but also at an international level, further academic research into the effects, efficiency of methods, and journalistic implications is entirely necessary. With an increasing appetite from consumers for news which leaves them with a positive outlook on the world, and an increasing amount of volunteers willing to wake up early and distribute this news on a cold, blustery morning, to consumers, constructive journalism does not look like it is slowing down any time soon. We should therefore expect the research and thinking on the domain to develop with it. 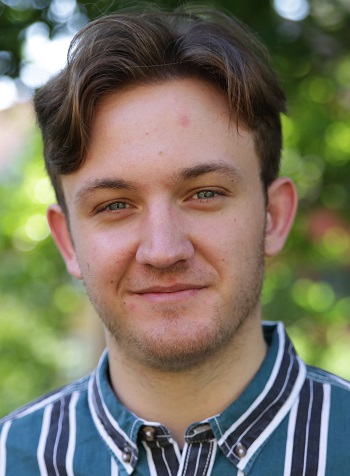 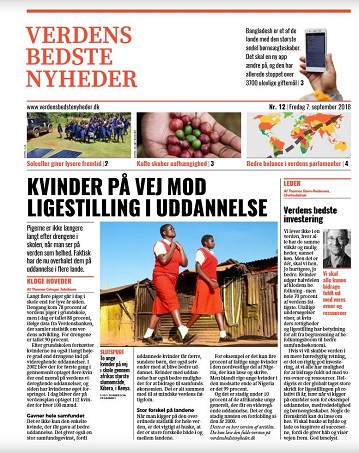 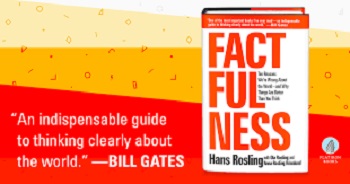 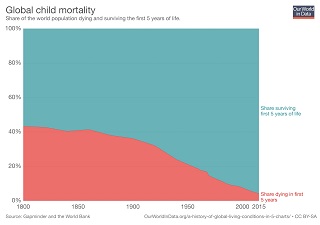 Hans Rosling often points to child mortality rates to present the progress of humankind, as opposed to negative sensationalised news

Haagerup U (2017) ‘Constructive News: How to Save the Media and Democracy with Journalism of Tomorrow: Revised Second Edition’ Aarhus University Press

The Economist (2017) “The world has made great progress in eradicating extreme poverty”, The Economist March 30th print edition”