During several decades, DANIDA funded research capacity building at universities in a few main recipient countries has engaged a significant number of Danish and South academics. Long term relationships have been built; field visits and study stays have crisscrossed continents, and dilemmas are quite clear.

North/South asymmetries in terms of resources and access to scientific communities are obvious. So is the eradication of indigenous knowledge by colonial science, which leaves little alternative to alignment with Western dominated institutions in knowledge production and publication. Difference in agendas is often voiced by Danish scientists as problematic. In Denmark, university management is urging faculty to acquire external funding. The expectation now goes beyond simple gap-filling. At the same time, scientific performance as measured by peer-reviewed publications defines career path/who is on the line in times of staff reduction or restructuring. These pressures make it less attractive to work for research capacity development with South colleagues. Rather, top-notch academics are sought for international cooperation. At some South institutions, e.g. selection of PhD candidates may not be fully merit-based. Opportunistic behavior in research focus adds to the irritation of North researchers. In addition, an overload of commitments with other donor-funded projects may burden South researchers to the extent that it prohibits any meaningful cooperation. Such cooperation may – by the way – already have been compromised by the fact that these projects have overlapping objectives; nonetheless, no coordination is initiated.

Completion and evaluation reports are duly written at the end of a research capacity-building project to check on compliance with the logframe of that project. This research, however, by Lasse Møller-Jensen and Lene Møller Madsen, is based on individual narratives covering a longer time span after being conferred the PhD degree.

The two authors have chosen a quite narrow focus: Nine narrative interviews with former PhD students from University of Ghana, who became part of the Enhancement of Research Capacity (ENRECA) programme 1989-2009. The objective is to assess the academic professional ‘in relation to his or her individual experiences and ability to pursue an academic career while the specific research topics chosen and their societal relevance will be touched upon only indirectly’. The nine PhD students, all male, conducted their studies 1993-2004, and they were affiliated with three ENRECA programmes, all within fields of technical and natural sciences

A general finding is that the respondents all started their PhD project at an older age than in Denmark. This corresponds to the age limit of 40 years set in the subsequent Building Stronger Universities program to make a PhD scholarship meaningful as contributing to research capacity building, considering the earlier retirement age compared to that of Denmark. Also, the different practicalities of daily life having spouse and children, a poor transport infrastructure and the extended family system implying a broader set of obligations beyond studying on the Ghanaian PhD student are important factors. At the university, the relations between the PhD student and the senior colleagues are influenced by three factors, which holds the potential for some form of exploitation: (1) a ‘traditional’ system of obligations towards seniors, (2) a desire to avoid confrontation both in general and specifically within the location of an attractive, potential employer, and (3) a higher level of computer skills compared to the senior staff at that time. The PhD students were given no promise of future employment by the university. Again, this is contrary to the effort by the subsequent Building Stronger Universities program of granting PhD scholarships to candidates already employed by the university, thus increasing the likelihood of research capacity building.

From the narratives of the nine male students, four main approaches of being an academic scholar in Ghana were identified in the analysis:

The article profiles perceptions of academic identities and career paths in the context of a donor funded effort to enhance research capacity in Ghana. The North/South divide in original research provides a strong argument for research capacity building. Looking back, Africa and also Asia have been a place for North researchers, including aspiring North PhD students, to collect empirical data for analysis and further theory development. In the Danish context, the ENRECA programme is often heralded as a golden era of research capacity development. The study presented in the article opens a discussion, which is much needed to inform current North-South research cooperation. However, a wider scope is called for, e.g. in terms of  tracer studies covering all involved PhD students, their career paths, application of knowledge gained, and the long term impact in their respective area of research. Personal fulfillment in climbing the social ladder may be at play, however, outcomes of applying public funded academic research aremore interesting. 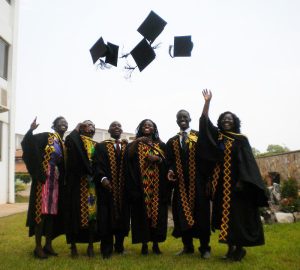 Gaardhøje  Hansen, Jens Aa.,, Thulstrup, Erik W.,Danske Unesco-Nationalkommission., Jens Jørgen. 2006. “Capacity Building in Higher Education and Research on a Global Scale : Proceedings of the International Workshop 17-18 May 2005 at the Niels Bohr Institute, Copenhagen : How Can Manpower Needs in Knowledge Based Economies Be Satisfied in a Balanced Way?” In . [Copenhagen]: Danish National Commission for UNESCO. 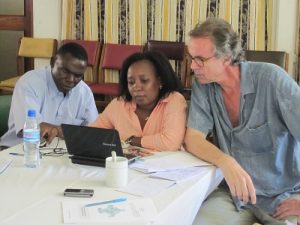