Bolivian PhD student at University of Copenhagen, Carla Colque-Little, researches resistance towards diseases in quinoa plants. This is important, not only for the Bolivian economy, but also for the recovery of the Bolivian identity after years of colonialization.

“As we recover our pride in quinoa, we recover our identity,” PhD student from Bolivia Carla Colque-Little states. As part of the Plant Protection group at University of Copenhagen, she researches quinoa’s resistance to the fungi disease downy mildew – a disease found in the vast majority of quinoa plants.

The loss of quinoa’s place in the heart of the Bolivian identity, which Carla Colque-Little refers to, dates back to colonial times, when European conquerors far from perceived quinoa a “super food” as many do today.

“They tried to erase the culture and the food – so quinoa became food for the outcast,” Carla Colque-Little explains.

Quinoa originates from the area surrounding Lake Titicaca in Peru and Bolivia and evidence indicates it was domesticated between 3,000 and 5,000 BCE. Spanish conquerors replaced quinoa with other crops during colonial times, and now – more than 500 years later – the Bolivian government and the UN work to revive the pride in quinoa. The FAO named 2013 the Year of Quinoa and the same year the Bolivian government established an international quinoa center on Bolivian grounds. Moreover, the government supports research on quinoa e.g. Carla Colque-Little’s research through scholarships. As mentioned, her studies focus the on diseases infecting quinoa leaves and seed.

“It (Downy mildew) reduces the area of photosynthesis of the whole plant and it weakens it and more importantly it goes inside the seed and then it preserves itself for next season,” Carla Colque-Little says adding that the disease can cause severe reductions in the harvest – especially if the plant is not a resistant species:

Downy mildew thrives in humid environments such as found in the lowlands of Bolivia especially near lakes. However, the disease is found worldwide – also in dryer areas.

“It is almost everywhere because it travels with the seeds,” Carla Colque-Little says.

New discoveries: Do not judge a book by its cover

Carla Colque-Little tested 100 different quinoa seeds from Bolivia to examine their reactions to downy mildew. During her experiments, she discovered something surprising in the plants, which looked untouched by the downy mildew disease.

“We we’re thinking ‘how can this be?’,” Carla Colque-Little says about the day she showed her results to her supervisor?

“When we see dry conditions we don’t see the symptoms of this disease, so we thought it wasn’t there and it just died and the other diseases more suitable to dry weather came in and that was our assumptions. But the DNA results show that it is still there in big proportions – we think it manages to survive with the help of other diseases,” Carla Colque-Little says adding: “That is very new”.

Downy mildew and other diseases are cooperating in the plant living in what Carla Colque-Little describes as a “symbiosis”. Looking into this symbiosis the research also revealed, which other diseases attack quinoa. According to Carla Colque-Little, the other diseases have only been documented in some internal reports in Bolivia, which did not go as much “in-depth” as the research she currently works on. Her supervisors at University of Copenhagen and collaborators at Hohenheim University (see info box) have helped her develop experiments to elaborate on how downy mildew and other diseases live in symbiosis in quinoa, at a later point. Right now, she continues to describe the reaction to downy mildew:

“Internationally we do not have a set of genotypes with known reactions, so if we can start building this, it will be useful for studying the pathogen,” Carla Colque-Little says.

When her research finishes in 2020, Carla Colque-Little will to publish a paper in an international journal on the 100 genotypes’ reactions to downy mildew. This, she hopes, can contribute to putting Bolivia on the world map of quinoa research.

Knowledge about quinoa is of growing interest because climate changes will create harsher conditions for crops we usually eat such as wheat.

“There is a lot of interest all around the world because of the resilience of the plant,” Carla Colque-Little explains and continues, referring to her recent field visit in the Bolivian highlands:

“These places are completely almost desert; it is so dry it is only sand – the soil is poor. You can’t see many plants grow there except quinoa”

Apart from its resilience, quinoa is very nutritious. Quinoa has up to 17 percent protein, contains all of the eight essential amino acids and is rich on minerals such as iron, magnesium and zinc and on vitamins B, FAO write on their website. To revive quinoa, Carla Colque-Little thinks it is important to link international knowledge with the reality in South America and her stay in Copenhagen has shown useful in this regard:

“Being here has enabled me to meet researchers prominent in the world,” Carla Colque-Little says.

The highland, the lowland and a future quinoa land?

The mountainous landscape and bare, unprotected land resulting in poor soil makes it hard to grow quinoa in the highland. On the other hand, the humid environment in the lowlands is favorable to downy mildew. The troubles of growing quinoa in big quantities and a growing export of quinoa, has made the crop expensive to buy in Bolivia. In addition, many Bolivians still think of quinoa as a food for “indio”. “Indio” is short for indigenous, which is associated with being from the countryside and discriminated.

“The Spanish conquerors prohibited it, if you ate quinoa it meant you belonged to the indigenous tribes and that meant that you were discriminated,” Carla Colque-Little says.

However, things are heading in the right direction.

“Now we have a native president. He came to govern in 2005 and we are recovering a lot of our identity so if you look brown that’s good now (…) It is slightly changing,” Carla Colque-Little explains.

Ascending to the highlands of Bolivia, the people here have a different perspective on quinoa.

“They know, they feel, they can see it is very nutritious to them,” Carla Colque-Little says adding: “Everything else will dry out and then still one stem of quinoa will be there… They are very proud of that”.

The growth in export due to the world’s realization of the plant’s potential has pulled some of the high-land quinoa farmers out of poverty but not made these communities rich. According to Carla Colque-Little, some big companies taking advantage of quinoa-trade being unregulated have on the other hand become rich. Such issues are one of the reasons, why Carla Colque-Little chose to study agriculture in the first place.

“I felt even as a child that my country had a lot of poor farmers (…) I thought I might wanted to help somehow and I am still trying,” she explains. One solution is according to Carla Colque-Little “to improve the commercialization” and for example ease the process of getting a label of origin and quality on the products in order to assure the farmers getting a fair price for what they produce.

Carla Colque-Little hopes to continue her research on quinoa when returning to Bolivia. Her goal is to support the quinoa sector through her academic work while helping to replace coca cola and pasta with quinoa, thereby working to regain the Bolivian identity and pride.

This article was produced in collaboration between UCPH SCIENCE and DDRN.

The music used is “Electro Lab” by Scott Gratton, produced under NonCommercial 4.0 International

PhD on quinoa’s resistance to diseases

Timeframe:
Carla Colque-Little began her PhD in Denmark in 2016 and will finish in 2020.

Scholarship:
The PhD is funded by the Bolivian Ministry of Education as part of the ‘Scholarships for scientific and technological sovereignity’ 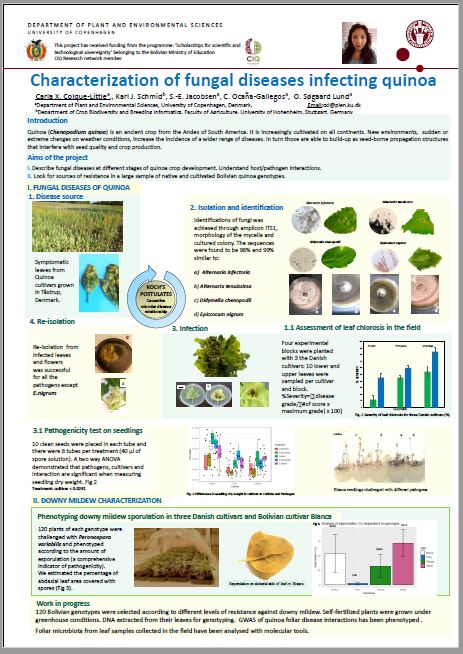