The year 2017 marks the centenary of the sale of three West Indian Islands by the Danish Government to the United States of America. A non-binding national referendum in 1916 – the first of its kind in Denmark and the first in which women had the right to vote – had come out in favour. The islanders themselves were not asked. The West Indian Islands were the last of the few overseas territories, which Denmark held during its reign as a colonial power. The US Government paid USD 25 mill. in gold to the Danish government for the now renamed US Virgin Islands. 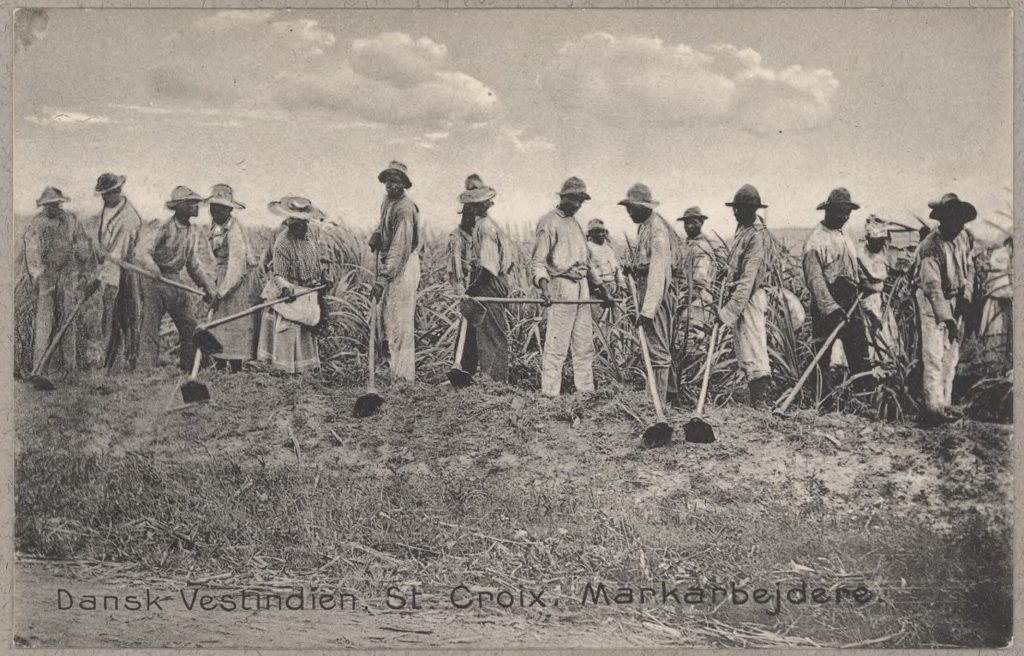 Danes are aware about this chapter of slave trade in national history. The centennial encouraged media, museums and science to document and reflect upon life and work of the African slaves and their Danish masters. It may have caught some Danes by surprise learning how profits from slave labour are very visible in the cityscape of central Copenhagen. The splendour of the royal palace and that of neighbouring mansions are testimony to the wealth accumulated from the products of slave labour. While guided city walks in Frederiksstaden added a new dimension to the tourist attractions of Wonderful Copenhagen, visiting representatives for present day citizens of the US Virgin islands toured the media asking for an apology from Denmark. Virgin Islanders question the celebration of the transfer from one colonial power to another. They only got US citizenship by the mid-1930s, and even today, their rights are not those of full citizenship.

The authorities in Denmark routinely reject to offer apologies in cases of abuse on the premise that this could establish a legal claim for compensation. The Prime Minister, Mr. Lars Løkke Rasmussen, did travel to the islands in April to attend a Centennial event. In his speech, Mr. Rasmussen announced a new five-year scholarship program with the University of the Virgin Islands for young people to study in Denmark. 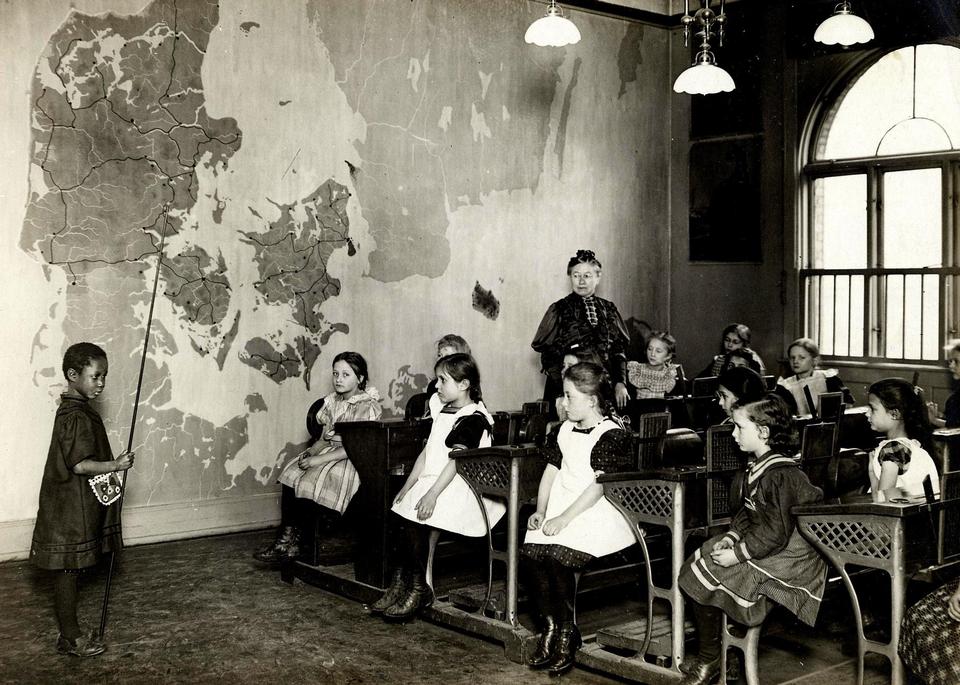 When young Virgin Islanders travel to Denmark, they may want to visit Øregaard Museum in Gentofte north of Copenhagen. The building dates from 1806. A wealthy merchant and ship-owner, Johannes Søbøtker, born on St. Croix in 1777, hired the French architect, Joseph-Jacques Ramée, to design a classicistic summer residence with a 27 acres park in extravagant elegance. Johannes Søbøtker was the son of a plantation owner; in fact, he was the fourth generation of plantation owners.

Furthermore, he and his father established a shipping company servicing the trade with the West Indian Islands. Søbøtker had several appointments as governor for St. Jan and St. Thomas. He made a fortune from his activities in the triangular trade prior to the Napolean wars. Later, his business declined, and in 1821, Søbøtker sold Øregaard. For the next one hundred years, wealthy merchants and bankers owned the house as a convenient get-a way from the congested Copenhagen city. In 1921, the Municipality of Gentofte acquired the property and made it into a museum with a public park.

In the spring of 2017, Øregaard Museum presented the exhibition Citizen X – Human, Nature, and Robot Rights with a direct reference to the museum’s historical origin: 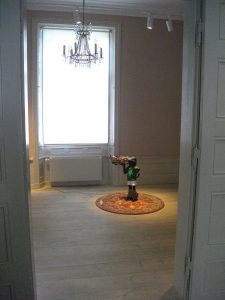 ‘The exhibition brings the Enlightenment debate over slavery into the present day, where continued discussion of citizen and human rights are increasingly entwined with questions about nature and technology…seven contemporary artists introduce new and diverse voices into the present day marked by globalised modes of dominance, exploitation, inclusion and exclusion’.

The exhibition provokes reflections on Western values about identity, citizenship, rights and ethics, since Aristoteles wrote about the ‘free’ and the ‘slave’. During colonial time, the social hierarchy in colonial time between people, nature and technology was distinct. In present day, these demarcations are being dissolved. The seven artists raise curious and critical questions. The original connotation of the term ‘robot’ is ‘forced labour’ or ‘slave’. Today, as artificial intelligence progresses, one may ask: Who will dominate whom: Man or robot? Do robots have rights?

At Aalborg University, a new research project entitled Spaces, Borders, Bodies. A Postcolonial Inquiry into Danish Politics on Forced Migration was launched in early 2017. It run for three years funded by the Danish Council for Independent Research, Humanities, with a grant of DKK 1,946.504. The approach of project is multi-disciplinary and comparative across time and space. The overall objective is to trace activities and understandings on forced migration in Danish colonial rule, focussing on the Danish Gold Coast (Ghana) between 1754-1850 and the Danish West Indies between 1754-1917, and then to compare these with current Danish and EU asylum and border externalization policies.

The research project is based at Global Refugee Studies (GRS), Department of Culture and Global Studies, Aalborg University, headed by Assistant Professor Dr. Martin Lemberg-Pedersen. It is carried out jointly with three partners forming a triangle not unlike the flows of European colonialism in Africa:

Contributions from critical geography, political philosophy and post colonialism forms the theoretical basis. In terms of methodology, genealogical inquiry, discursive and normative analyses are used to explore to what extent current Danish forced migration politics echo and differ in certain geo- and bio political interests and the production of spatialities, and in terms of normative-political justifications of colonial Danish practices. This exploration will involve archival searches in Denmark, Ghana, U.S. Virgin Isles, Netherlands and Washington.

The outcome is expected to add historical and moral depth to Danish and European debates on the rationalities of borders and others.

Extract of the speech by the Prime Minister of Denmark, Mr. Lars Løkke Rasmussen, on 1 April 2017:

But although we share a common past – we have not always shared the same story about that past. When I was a child – the popular Danish story about the West Indies, was a romantic one. Exotic islands. Peaceful coexistence. I even remember the tales of the Danish king, who was the first in the world to ban slave trade. A pioneer of humanity, we were told. A hero. But most of you were told and lived a different story. The true story. A story of how slavery continued after the ban. How too often conditions only improved on paper. And of how many of your ancestors continued to suffer. The true heroes were the men and women who stood up to the injustice… 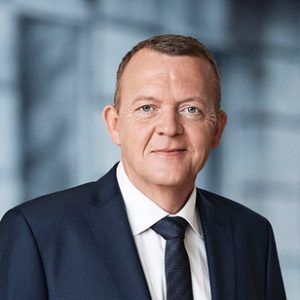 There is no justification – what so ever – for the exploitation of men, women and children that took place in these islands under Danish flag. There is no justification for slavery. It is unforgiveable. Unforgiveable. It is a dark and disgraceful part of Danish history. So when I search my heart. My mind. There is no doubt: The true heroes of the past are the men and women of the Virgin Islands who defied suppression. They were not given their freedom. They took it back. Led by brave souls. Who risked their own lives to set their fellow countrymen free. Men like General Buddhoe. Who led the rebellion of 1848. Riding on a white horse. Fighting for emancipation. Imprisoned. Deported. But at the end successful – fulfilling his mission. Fierce women like Queen Mary, Queen Agnes and Queen Mathilda. Who rebelled against the appalling living conditions, healthcare, education and wages. Imprisoned in Denmark, right next to the Danish parliament!
Patriots like David Hamilton Jackson. A teacher and idealist. Who dedicated his life to improve the conditions for the people of St. Croix. By peaceful but passionate means…’ 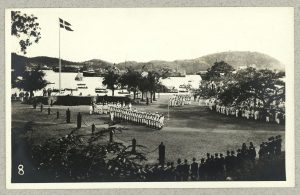 The exhibition was curated by Toke Lykkeberg in collaboration with Lotte Nishanthi Winther. 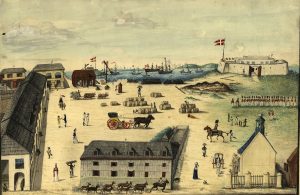