The fundamental inequalities in research projects are still the same as they were 30 years ago and they are not likely to disappear. According to an experienced Danish researcher, there is a strong need for such projects in the future, but also for increased awareness about how we formulate them.

There is currently a debate among researchers about today’s collaborative projects between the South and the North. Collaborative research is crucial for many reasons, but with regard to inherent inequalities in the partnerships, little change has taken place over the years, if you ask Associate Professor Iben Nathan from the Section for Global Development at IFRO (Department for Food and Resource Economics) at the University of Copenhagen.

“Research in collaboration with the South is crucial, not only because we need to assist our colleagues by providing funds for and other support to the education of PhD students, collaborative fieldworks, and publications. In some cases, this is also one of the few opportunities for giving vulnerable people in the South a voice.” “But we also do collaborative research for our own sake. For us as individual researchers, the partnerships are necessary for fieldwork and publications. For us as society, we need to improve our knowledge and understanding of people and societies in other parts of the world. In the long-term, such understanding is fundamental for reducing conflicts and ensuring peaceful development.”

“With regard to the fundamental inequalities in collaboration, however, little change has taken place since I did my first fieldwork in Bangladesh more than 30 years ago,” she says. “Even with the best intentions, it is still researchers in the North who have the last say in determining topics and formulating research projects, which most often are in and about the South.” But it is difficult to make fundamental changes, she acknowledges. “Given the fact that money and knowledge about the Danish funding system comes from the North, inequality is not likely to disappear. Whether we want it or not, money is power”.

“It is totally fair that we have mechanisms to secure control with the economic management of the partnership projects. We cannot just deliver a bag of money and go back home. Even if we did, there is no guarantee that this approach would result in more equity.” Nevertheless, important changes in the way we conduct these projects are still possible, she adds.

Global issues are in focus

“In addition to being open about our mutual learning, we could be more open to the idea of funding a number of projects with South partners coming to study the North – as well as projects where the two sides are studying each other, or where the partners together study global links and dependencies.”

“Today, global issues like the climate and environment crises are in focus for some South-North partnership research projects. Here, it is more clear than for many other issues that the problems in the Global South to a large extent are rooted in the North. In the climate debate, for instance, it’s obvious that the North has caused many of the problems the South faces today, and while you are in a strong position as a researcher to give affected people a voice, you cannot find any workable solution by entirely looking at the situation in the South”.

For instance, the production of soya and cocoa beans primarily for export to the northern markets is a major driver of deforestation, harming climate, biodiversity, and peoples in the South. “We have to study these and other kinds of issues together to understand both how global links work, and how they affect local people. Actually, the dependency theorists pointed to similar issues already in the 1960’s. I believe in reinventing parts of their approach”.

Iben Nathan is originally by training a political scientist, and she has been committed to working with the global South since she for the first time travelled in India on her own accord right after high school. “When I arrived in Bombay – as Mumbai was called then – and drove from the airport into the town, I saw slum, slum, slum. Endless slum. I clearly remember a picture of a woman sitting on the ground with a group of children around her, cooking rice in a can on a small kerosene burner. It made a great impression on me at this early age trip to experience poverty, but also the fabulous people I met and their hospitality. Here, I wanted to make an effort”.

“So, I knew all along that I wanted to work with The Global South”. There were not many topics of relevance to the Global South, but her supervisors at the Department of Political Science and at the then Center for Development Research mediated contacts, which enabled her to write both her master thesis and her PhD dissertation on decentralization and local government in Bangladesh – “as seen from below”, as she stresses.

During one of her longer stays in rural Bangladesh, she lived with a local family, while carrying out anthropological style fieldwork, partly in collaboration with local colleagues from Bangladeshi Rural Academy.

After having defended her PhD, she didn’t want to be too narrowly focused on one specific country in the South. At that time, she never wanted to be a researcher again because writing up your results “is too much of a lonely world”. In the beginning, she therefore worked mainly as an advisor, among other things, for projects in Africa and Asia, but today she is happy that she gradually returned to the world of research.

We want to improve our knowledge

Throughout the last couple of decades, she has become very experienced in working with partnership research projects mainly funded by public Danish sources. “I really like working on these projects, but I wish we did not talk about them as capacity building solely of our partners in the South”.

“It is true of course that “we” arrive with something “they” can learn, but I am very much in doubt about who learns most during such a project. It’s crazy how much I learn every time. Instead of constantly talking about building “their” capacity, we should realize that everybody learns. You always learn new things by collaborating. It’s just as much about building the capacity of us in the North. If you have a project in Kenya, for instance, you learn about the Kenyan society every day”.

Iben Nathan has worked with people from a large range of fields in her projects. “I have collaborated with colleagues from the social sciences, anthropologists and geographers, but also with foresters, veterinarians, biologists, and other natural scientists. It all depends on the project in front of us. Some are from the South, others from the North”. “But inequality is a fact”, Iben Nathan continues. “Personally, I have always tried to get the best out of these projects, to do an effort to make certain we create partnerships, but I can only hope that I have not made anybody feel humiliated or colonized on a daily basis”.

Recently, Iben Nathan was a co-writer of a policy brief published by DIIS and the Danish science portal Videnskab.dk, together with South and North researchers involved in Danish-funded development research projects.To her and her co-writers, it is very much a question about the way we talk about our collaborative research projects and partnerships.

“Even if it’s difficult, we should at least be able to work with ourselves and try to change the language we use, be more open to the fact that the projects are common projects, which hopefully serve both the South and the North. How we use the language – it would already mean a lot if we were much more aware about it, but broadening our ideas about what a development research project is, could perhaps also make a difference”. 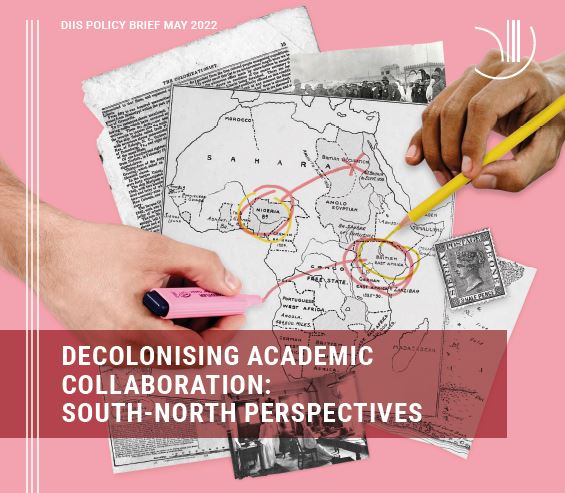