What is the impact of development aid on longer terms? In some areas, it is easy to document whether initiated activities have made an effect or not. The health benefits when a village gets sanitation. The economic leeway following micro investments. The decline in the mortality rate in an area after a vaccination programme.

When it comes to capacity building in higher education systems, it is much harder to show direct evidence of the development effect in society.

That is the point of Director of DUCED I&UA Niels Thygesen. Nevertheless, when asked, he has no doubt that the effect of the DUCED/LUCED programme was massive in the targeted countries. The initiatives implemented almost 20 years ago have rubbed off even to this day.

“It’s quite extraordinary that something that started in 2001 still has an effect. The activities set up back then continues in some ways. But of course, it can be difficult to see, even for the participants themselves,” Niels Thygesen ponders.

The DUCED programme was in essence a collaboration programme among five Danish universities andUniversity Consortia in Malaysia (MUCED), South Africa (SACUDE) and Thailand (TUCED). The main aim was to work on new teaching methods, that had proved effective in Scandinavia based on methodologies like problem-based learning (PBL).

“Most of the world’s education systems, and especially in developing countries, are based on blue sky science and command teaching. We wanted to introduce a teaching style, where students had to go out, and try to solve real existing problems. One of the big challenges were to introduce these methodologies around the world,” Niels Thygesen explains.

The programme had three legs:

The structure was decentral. Every programme had its own budget and could administer the funds according to the local planning. Therefore, the activities differed slightly from country to country.

In order to develop and share technology and management systems in environmental planning, the local conditions have to be part of the problem solving. In DUCED, the philosophy was, that scientists need not to sit behind a desk and give theoretical advice. They need to get their hands dirty. During the programme, 60 Danish students went abroad each semester, to study with professors at the local universities under joint supervision. Also, field trips were arranged for both staff and students in all the countries.

A number of students were going the opposite direction and made their master thesis in Denmark. The difference was that the foreign students brought local challenges with them, to learn from experiences in Denmark in certain areas such as waste management, chemical engineering, and comparative environmental impact assessment.

The effect for the students would ideally be a move towards a more holistic understanding of how to solve a task rather than just minding the technical aspects. The hope was, that this mindset would trickle down in the educational system and eventually into the society.

“With so many students going through, some will obviously go to the public sector, some to private business communities and some into research, but the main point is, that they would be more management oriented instead of just technical,” Niels Thygesen explains.

In each country one or two master programmes was created. These were made as a collaboration between the Danish universities and the universities in the respective countries. Lecturers from different faculties met up to discuss how to secure multidisciplinary approach needed for problem-solving oriented teaching. In the targeted countries, interdisciplinary collaboration was quite unusual at the time

“The master programmes made during the programme contained curriculums, which had to be approved, first by the universities and later on the Ministry of Education. So it was a very formalized approval process, and it is obvious, that it will have a tremendous effect in countries, where the norm is very rigorous courses where people sit in class without any field work. Especially since developed curricula will last for a minimum of 10 years, where master students will continuously be produced,” Niels Thygesen states.

“Also, the development of master programs had the effect of encouraging teachers to collaborate, and create valuable networks,” he continues.

Finally lecturers at the universities was trained in PBL. This was an important aspect to integrate problem-oriented approaches in the curriculums and in future teaching. An important vehicle was to develop professional training courses targeting the public and private sector introducing PBL and interdisciplinary approaches.

“We saw that these training courses were adopted by the local universities and they were able to make a business offering training,” Niels Thygesen says. In addition, the private and public sector participants often offered students from the master programs to be a case in their project work.

A change in development strategy

In 2004 the DUCED programme and other programmes on higher education expired. DANIDA changed the strategy towards a more focus on poverty reduction and support to agricultural development. It is the impression of Niels Thygesen that there was a fear that the exchange of students and staff would lead to brain drain in the developing countries, and this is one of the reasons, that the Danish government shifted focus to support production on behalf of education. An unfortunate decision in his opinion.

”If you ensure a well-functioning education sector, also at university level, it will trickle down. But it is hard to see a direct effect. But it is striking, that almost all the participating lecturers in the developing countries became professors. They have all been able to influence the research institutions they worked at afterwards,” Niels Thygesen emphasizes.

He does regret though, that the results of the programme was not documented better. Both because the benefits might have come out clearer and because a lot of the obtained experiences is not accessible for the following generation of scientists to pick up.

The structure of the organization made it hard, though. Every consortium had its own budget and the support was given directly to the universities making a coordination of efforts difficult. So, everything was organized in a decentralized manner. As all four university consortia consisted of approximately five universities each, and as every university with two to four faculties involved, it was a spider’s web of involved partners, who all report back to their own units.

“Academics are not trained to evaluate. Maybe we should have earmarked a portion for an external audit at the projects to get an overall evaluation of the impact,” Niels Thygesen says.

Berit Viuf is a Danish science journalist; the interview was conducted following a reporting trip to Malaysia and Thailand 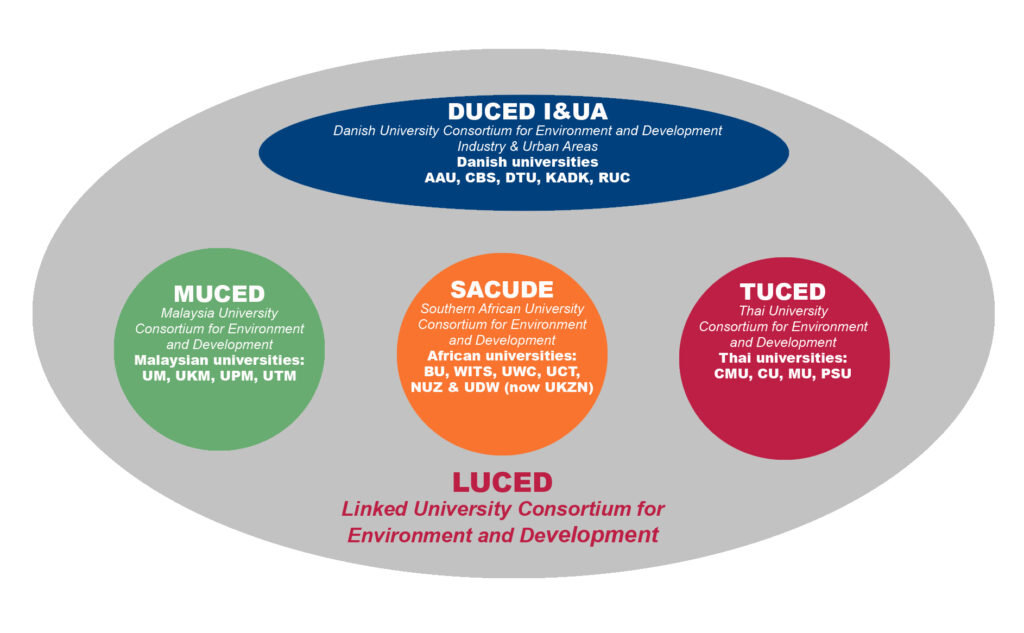 In 1998 DUCED, a consortium of five Danish universities was established by DANCED (Danish Co-operation for Environment and Development, Ministry of Environment & Energy), in order to work on capacity building to enhance sustainable development in Denmark and other parts of the world.

Capacity building was a buzz word at the time. The concept aimed to help developing countries to be able to solve and prevent environmental problems by themselves. Quite a challenge in countries that struggled to obtain and continue economic growth, and as a consequence tended to override environment considerations.

The idea of capacity building in DUCED was to build competences by supporting higher education, and it split out in two programmes: DUCED-SLUSE (Sustainable Land Use), and DUCED I&UA (Industry and Urban Areas). This article describes the experiences with DUCED I&UA.

Establishment of international consortia and networks

During the first years, DUCED involved planning and preparation of how to secure capacity building in higher education. For example by developing courses at Danish universities, to provide basis for training of Danish students in developing countries.

After these first initiatives, the project went into the consolidation phase, and in 2001 three consortia was created in Malaysia (MUCED), Southern Africa (SAUCED) and Thailand (TUCED). Each consortium consisted of four to six national universities, and each university had several faculties associated. The four consortia went under the name LUCED (Linked University Consortium for Education and Development) and was targeted capacity building by educating academic staff and students in environmental management.

Six key research themes were selected, in order to address the urgent environmental challenges the targeted Asian and African countries faced due to fast urban growth and expanding industry.

Different networks of academics from the participating universities was formed around these six research areas.

The educational activities focused on problem-based methodologies and training of staff. They included:

The core of all activities was to introduce problem-based methodologies in order to challenge the traditional classroom education and strengthen intercultural knowledge and multidisciplinary research.