On 20 December 2016, Ms. Masheti B. Wanoyi defended her PhD dissertation ‘In Nairobi, they speak English’ ending a more than four years’ research process divided between thirteen months of field work in Kakamega, Kenya, and three years of analysis. In the process, she was being supervised by Professor Lisa Ann Richey and Associate Professor Bodil Folke Frederiksen at the Doctoral School of Social Sciences and Business, Roskilde University, Denmark. The defence was successful. Masheti B. Waynoi was confererred the PhD degree in Social Service. Marking the milestone, Roskilde University, probably as the only university in Denmark keeping the tradition alive, handed over a Doctor’s hat.

The initial inspiration for the PhD dissertation came out of fieldwork for Masheti B. Wangoyi’s Master’s degree. In 2002, she conducted a study on women’s vulnerability to HIV. During the interviews, the women complained that they were likely to contract HIV because men behaved in ways that affected their vulnerability to HIV. The statements gave the impression that men were passing on the virus without harming their own health. Masheti B. Wangoyi recommended that another study should be conducted on men’s vulnerability to explore the phenomenon from the point of view of both genders. Years later, she came to fulfil that recommendation herself by performing the study, which forms the basis for her PhD dissertation.

Drawing on thirteen months of fieldwork in Kakamega, where she was born and partially raised, and three years of analysis, Masheti B. Wangoyi’s research tells the story of capable men, who are struggling between traditional social norms and social change while lacking the support as well as opportunities to make the needed transition. Outside actors, such as WHO and UNAIDS develop plans to prevent HIV in Africa: abstinence, behaviour change and the use of condoms (ABC); Voluntary Counselling and Testing (VCT); and male circumcision. However, as these actors limit their efforts to the personal attributes and behaviours, they fail to examine the influence of macro-structures on the vulnerability to HIV. National actors promoting male circumcision are prone to local suspicion. At the local level, men and women dismiss them saying ‘in Nairobi, they speak English’, although the physical distance to Kakamega is short. ’English’ is a metaphor to denote a hidden agenda for the benefit of the actors. The situation on the ground may be one nurse caring for 2,000 people at the local dispensary. Her clients are women; men only appear on their death beds. And the women have to bring home the male condom. But for the men, food on the table is more important than a condom at night.

‘It was, simplistic for global and national actors to assume that by transmitting HIV related information, posters and condoms through the groups would translate in ability of the people at the local level to mitigate their vulnerability to HIV’ (p.7).

The men were actually struggling to alleviate the vicious circle of illiteracy and poverty that shaped their vulnerability to HIV; they did understand that HIV would shorten their lives and limit their ability to support themselves and their families. However, for them HIV did not change their social identities of masculinity. They used their ability to father children as a verifiable indicator of masculinity, power and continued survival of social groups. Within this perspective, the time, money, and other resources for the care of the sick and the dead, and the negative impact on their collective ability to work were not considered.

The outside actors failed to understand how the inequalities in macro-structures influence men at the local level, and never grasped why the people perceived their plans as irrelevant at the local level. Masheti B. Wangoyi further observes that:

Even though many actors came from rural areas, once they moved to the urban areas, or got into national positions, they were perceived to develop selective amnesia about the structural inequalities in such settings (p. 220).

The assessment committee gave credit to the sensitive and reflective fieldwork of Masheti B. Wangoyi. In wrestling with the insider/outsider boundary and relying on productive tensions between the two, she establishes a ‘gateway’ to show how macro structures of inequalities play out on the ground, thus contributing to an indigenous social analysis so much needed given the legacy of anthropology in Africa.

Read the book! On loan from the Roskilde University Library.

Wangoyi, Masheti B. 2016. In Nairobi they speak English: Vulnerability of men to HIV in Kenya. Roskilde: Department of Social Sciences and Business, Roskilde University. 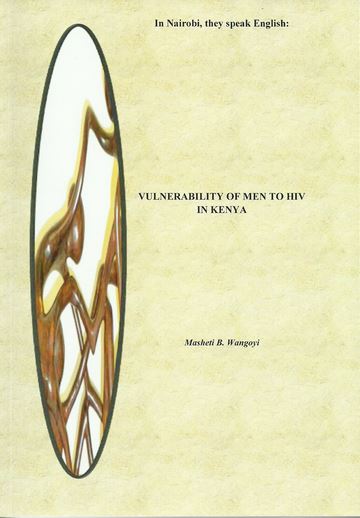 ‘Did they say a cold killed him? Is it a cold?

That a cold of the brain killed him? A cold?

They it is a common cold, for everyone?

Yet, hunger killed him, it is hunger!

Wooi, hunger for all, it is hunger!

Hunger killed him, it is hunger!

Mourners, dirge at funeral, 13 June 2011, translated by Masheti B. Wangoyi

Illustrations from the book 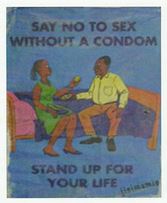 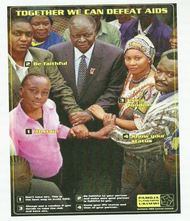