Once dry tropical forests in Ecuador were common ecosystems. Now there is only eight % left of this type of forest, which has had the bad luck to compete with the most invasive of all species: The humans. Meet the Ecuadorian scientist who has specialized in the dry tropical forests.

In the tropical areas they are so common and close to urban areas, that hardly no-one pays attention to them. They play an important role in the culture here in the Ecuadorian part of the Andes. The dry tropical forests.

3-4 months without rain
It is still the beginning of the day, but here close to equator the characteristic mountain sun burns strongly, the air is dry and the altimeter shows 2415 meters above sea-level.

We are accompanying scientist and Professor Catalina Quintana (57) on a fieldtrip to the village of Nayon together with one of her students, Monica. They are in the middle of making a transect to monitor the biodiversity of plant species in that specific area. Hundred meters long and ten meters broad.

“There is really little research on the area of dry tropical forests and in Ecuador the research field was empty. So I thought, this is for me”, tells Catalina Quintana between the jumble of dry bushes.

The small group is measuring the diameter of one of the acacia trees there are common in this kind of ecosystem. Dry tropical forests are characterized by being in the tropics and having three-four months in a row without rain. The species growing in these forests can survive the hard circumstances.

“I find it really interesting to study how the trees are conserved in these dry conditions”, Catalina Quintana tells.

Invasive species
The Ecuadorian scientist is concentrated while explaining her student about the methods and tools for measuring. She kneels down and shows one of the plants there are most of in the area: Kalanchoe is an invasive species. It has thick leafs and looks competitive and strong. A witness of the strong human presence around here. Probably it began as a domestic plant and now it became part of the landscape. And it’s not the only invasive species that is threatening the existence of these so-called dry tropical forests.

“Generally people have habituated the areas of the dry forests. It’s ideal for living because of its temperature and that it’s not too humid.”

Because of that, today there is only between eight and twelve % left of dry tropical forests compared to the original extension of that type of forest in Ecuador. The area we are visiting is situated really close to the capital of Ecuador, Quito, and is an area protected by  Pontificia Universidad Católica del Ecuador (PUCE). “It’s all there is left of the dry forest around here. The rest has been eaten up by the city”, explains Catalina Quintana.

There is only one other area of dry tropical forest protected by the Ecuadorian state.

“Around ten % of the vegetation in the dry tropical forest is exclusive for this particular area. We need to study it while it is still here”, Catalina Quinta explains.

The forest is a part of the culture
Catalina Quintana got a scholarship to study a PhD at Aarhus University from 2012-2015.

In Nayon, close to being the scientist’ backyard, Catalina Quintana shows one of the common plants in this kind of forest. The so-called Chamana – the shaman-three (Dodonaea). It is believed to keep bad spirits away. And it’s not only people who’s having a close relationship with the dry forests. These areas are also home to many animal species of birds, owls, hummingbirds, foxes, rabbits and hedgehogs among many others. Animals that will disappear if their habitat will disappear.

Even the sounds surrounding the forest is echoing what is happing with the dry forests. Songs from several different bird species is creating a mix with the far away sounds of cars from Quito.

“It’s exciting to study the human influence on the forest”, states Catalina Quintana.

According to historical writings people has been living in and together with dry forests for centuries.

This post is the third in a series by Lise Josefsen Hermann, journalist based in Ecuador, about results of the ENRECA program in Ecuador.

Conserving palms is conserving the ecosystems

Some of Catalina Quintana's research: 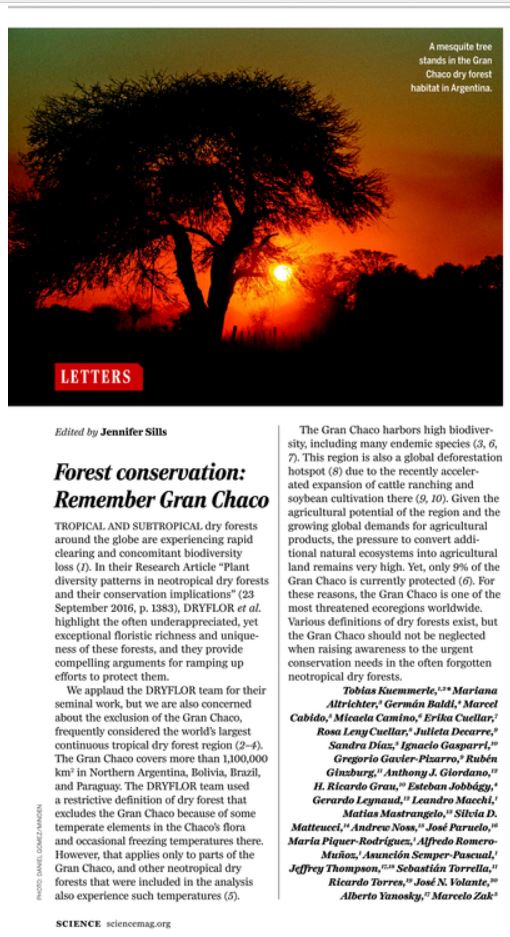