Danish support to research in Ecuador has contributed to document the mega biodiversity in the national park of YASUNI – the biggest in the country, the most famous – and also by far the most controversial national park – maybe even in the South American continent.

A national park that even get to be voted about in national elections (February 2018). The most biodiverse place on the planet. A national park with loads of oil beneath and on the same time being home for uncontacted indigenous peoples. Let me introduce you to: YASUNÍ.

Yasuní is a mega diverse area – the most biodiverse on earth. It is especially rich on tree-species. Back in 1989 Yasuní was declared as a biosphere reserve by UNESCO.

As many species as North America
The Ecuadorian University  Pontificia Universidad Católica del Ecuador (PUCE) has been studying Yasuní since 1995. The leading researcher is Renato Valencia, who conducted his PhD about compared forest ecology in the Andes and the Amazon at Aarhus University (AU) in the beginning of the 90s with a scholarship from the Danida financed ENRECA program. For Renato Valencia it made a big difference being able to do his PhD abroad:

“As a scientist the most important is to internationalize. To open your mind about to how to make research. I think, I wouldn’t have understood that elsewise”, states Renato Valencia, teacher at the biology department of PUCE and director of the Yasuní research program at PUCE.

And there is a direct connection with these studies and Renato Valencia’s big research project about forest dynamics in Yasuní. In 1995 there was a 50 hectares big parcel selected in the national park with collaboration from Aarhus University among other partners. The objective is to be able to study thoroughly and to be part of a big study of climate change affectation of forests around the world. The parcel is one of around forty around the world. And the results in Yasuní were astonishing:

“Within one hectare we have found 670 different tree species. That’s as many as in the whole North America”, explains Renato Valencia clearly proud.

The Amazon and Climate Change
We are visiting Renato Valencia at his office at the biology department at PUCE in Quito.

Another result of the Danish cooperation is the development of a really strong and internationally recognized herbarium. Renato Valencia shows us one of the many samples from trees in Yasuní. The herbarium counts more than 200,000 species.

“To have a strong herbarium in developing countries in the tropics is still really important, because we are still discovering new species all the time”, explains Renato Valencia.

The researchers’ current work in Yasuní is concentrated about, why there are many tree-species in tropical forests, how the forest is changing and how it’s affected by climate changes.

“The Amazon is special, because is has the biggest concentration of tree-species in the world”, states Renato Valencia.

As a result of the research on Yasuní there has also been created a herbarium in the middle of the jungle inside the Yasuní national park.

The most controversial national park
But Yasuní isn’t only rich in tree-species. It has been known internationally because the former president of Ecuador, Rafael Correa, declared that there wouldn’t be exploited oil beneath the soil of Yasuni, if the international society would help paying for keeping it there. A very popular proposal, that gave Correa a lot of credit internationally. However the proposal didn’t succeed. Short time ago the exploitation of oil in Yasuní began again – despite protests in Ecuador and around the world. It means that conducting research on Yasuní is to work in the middle of one of the hottest topics in Ecuadorian national politics. Definitely not uncomplicated.

The research about Yasuní, which Renato Valencia has been leading, is important to be able to document the arguments behind keeping Yasuní as a protected area – being remarkable for its biodiversity even on a global level.

The Yasuní research program is an important contribution from Ecuador to reach the UN sustainable goal No. 15 about halting loss of biodiversity among other things. Furthermore Yasuní national park is also one of Ecuador’s important tourist attractions – also centered on the enormous biodiversity.

Research financed from abroad
For Renato Valencia the ENCRECA-program has left important footprints at biology-research in his country;
“Nowadays PUCE is a referent in the biological field. Denmark and Danida have definitely contributed to that”, states Renato Valencia.

All in all the ENRECA program gets positive feedback from its Ecuadorian participants in PUCE. But there are still details left to improve for PUCE, states the researchers.

The research on PUCE is still depending on funding from elsewhere. It is still not highly prioritized by the Ecuadorian government to spend money on research.

Meanwhile Renato Valencia, his colleagues and students keep on counting trees and documenting the biodiversity – where there is most of it on the whole planet – Yasuní.

This post is the second in a series by Lise Josefsen Hermann, journalist based in Ecuador, about results of the ENRECA program in Ecuador.

Migration in the context of conflict and resource struggles: Experiences of Burmese… 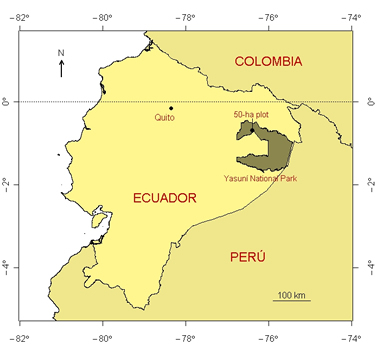 Two of the trees discovered by monitoring Yasuní

The cedar (Cedrela odorata) is the most sought-after tree species for wood in the market. The specie has therefor a lot of pressure for illegal logging. In the Yasuní project there has been monitored a population of 120 trees of different sizes of cedar. The wood is excellent for making furniture and other uses in house-construction. The trees reach diameters greater than one meter.

Another emblematic specie is the Pentaplaris huaoranica tree. This has only been registered in Yasuní and can reach sizes of more than one meter in diameter and 30 meter in height. The special thing about this endemic tree is that it tends to have very small dispersed populations. On the 50-hectares parcel there has only been found one of this specie.