For almost a decade, in the center of the city of Copenhagen, a community has established themself in the area of «Fredens Havn» (Port of Peace) or ” Pirate Port”, as some have called it.

These group of ships and floating modules are located as a maritime extension of Christiania, an alternative neighborhood in the city center of the Danish capital where people inhabit in a «free» or autonomous way. The “free city of Christiania” (Fristad) is known and recognized  for being self-governing and independent of the Danish state, for allowing the sale of  drugs (such as marijuana and hashish) and where its almost 1,000 residents have a semi-rural lifestyle in the middle of the city.  Even though both communities inhabit spaces formerly used by the military, «Fredens Havn» is characterized  by their cultural diversity where everyone «floats», in a literal and  philosophical way, in a free space or «Fristed».

Many of the people who lives in «Fredens Havn” have a difficult past where they ended up living in the streets and the boats have allowed them to experience more stability; others have chosen to live there to be more close to the nature, others have simple adopts a simple way of life that this zone is prone to. It is a place that, at first sight can be difficult to see, but when you understand them and know them on a deeper level, you can be fascinated and seduced.

Many of the people reuse old boats called «Kronebaade» (one cent´s boats) and they adjust them to their sustainable lifestyle. Between the people who inhabit them and their friends, they created a community based in companionship and reciprocity. During their meetings -held twice per month-, they propose new goals and standards for the area, they discuss personal issues and set a standard for cleaning and beautification of the place. The physical order of the area has been a great topic that takes a lot of time and energy to the community.

The starting point of this community has been the collection of external garbage that ends up on the edges of the boats or on the plants by water currents that carry the dirt from the city and concentrate it in the port. Then, they continued with the cleaning of the streets that connect them to the rest of the city. As a group they organized themself to create a common area in the ground, «The Garden». Taking back the land abandoned and harmed after the military passed three hundred years ago, they have reconfigured the area establishing places for vegetable gardens, meeting places, cooking and art. “We want the children and the mothers to come and sit here,” says Di, a friend from the Port.

Nevertheless, the floating community has been involved in different controversy with the neighbors on the opposite side, who live in the wealthy private residences of Holmen. These people have expressed to the local authorities their annoyance with this group that they installed free of charge and which, according to them, is unpleasant. They have denounced the messy, dirty and noisy way in which they live, getting politicians to intercede for them for the expulsion of those who have decided to inhabit the port in its fullness.

An article published by the national media TV2 reflects the contrast between the neighbors of Holmen and the people of the floating community. Meanwhile the first ones “are angry because they have to see a floating wasteland”. “They consider that the free port is a cemetery of boats that harms the environment, and it has to be completely eliminated”. The inhabitants of the floating community state that they have dedicated a lot of work and efforts in the building of the community, and they also don’t agree with the remains of boats that harms the environment. Actually Esben Banke, one of the residents, points in the article that they funded a big cleaning in 2016, where with the aid of the eco-friendly boat Selma they removed 30 tonnes of waste from the harbor. Besides, Banke organizes an annual community cleaning between the residents that takes place during the weekends of the spring till April 1th , the time when the reproduction cycle of the aquatic birds starts.

Taking advantage of the waste

If we look after the definition of the names that politicians and neighbors have used to refer to the port, we can do a wide analysis. According to the Cambridge Dictionary, “trash” as a noun is understood as a «anything that has no value and has low quality, waste», «waste material or things that are no longer wanted or needed». If we look the word “waste” we can find “An unnecessary or wrong use of money, substances, time, energy, skills, etc.”, or also “unwanted material of any kind, specially what remains after the substances or useful parts have been removed”, “A misuse of something valuable of which only a limited quantity is had”, and finally “human waste is excrement”.

If the preconceptions of these words are normal to them and us, In which way do the perspectives of both communities differ?

An example is that to everyone, the “toilet” is a place of waste disposal. But for some it does not have a meaningful use and excrement must be transported with drinking water to a dumping site to be “disposed of”. For others, however, the Toilet is a key element in bringing the infertile land back to life. At Fredens Havn, most of the people have a toilet made with a paint can in which they mix soil with excrement  and ordinary base to sit on. Once the can is full, it is transported to a common cube where the organic waste is collected and they recycle for using the common garden. It seems that the perception on the caducity and life span of the materials comes determined by the sense of aesthetic and use of every individual.

According to European statistics, Denmark, a country of almost 5,800,000 inhabitants, leads the ranking of waste generation in Europe with 844 kg of waste per capita, followed by Luxembourg with 791 kg and Norway with 766 kg. While “first world” societies design wasteful and over-accumulating lifestyles, other spheres of society are opening to new conceptions about waste, one where the majority of citizens allow the almost gratuitous life of others. Thus, with reused materials collected in the streets, in the garbage cans of the architecture school, in the second-hand shops of Christiania or with gifts from friends and close friends, the inhabitants of this community take back to life thousands of waste materials. Some of them, such as Esben or Ørn, have used one of their floating modules as workspaces with lightweight structures that they  assemble in donated boats.

The double understanding of waste and their use

The book «Materiality and Society» by Tim Dant (2004) also reflects on the relationship between human beings and things, and how it defines relationships and creates societies.

“Our culture is fascinated with the old and the new, that is why we treasured memories of our families and acquired antiques or old furniture to furnish and decorate our homes. What used to be “garbage” now is recycled, not to avoid waste as to maintain continuity with our cultural past. Museums and their collections organize the history of our material civilization, allowing us to marvel at how far we have come; equipment from a generation ago has become old fashioned and interesting in contrast to what we use now”.

A can of beer, kerosene bottles to build a fire, an accordion, and many second-hand items are a great refuge for some.

What for many can be an accumulation of dirt and disorder for the to Icelandic Ørn means a space of disconnection of a harsh past that implies the death of two of their sons and his wife. The community is to him a rest and a shelter where he can distract contemplating nature and creating new projects that bring meaning to his life.

There is an expression in Japan called Wabi-Sabi, used to define the art of imperfection, modest and no traditional.  Leonard Koren (1994) in his book «Wabi-sabi for artists, designers, poets & philosophers» explains the term so similar to the art shown in the free port.

«An exotic market based on aesthetic obscurantism (…) A moment in which ‘nature’ – the flexibility, rigidity, hardness, etc. – or the ‘soul’ of the leaf is actually created. (p.18) (…) ‘rustic’ as ‘primitive art’ (…) The Wabi Sabi is almost never used in a representative or symbolic language (p.21) ».

This reality that is so contradictory to the citizens of Copenhagen makes visible the reality of many cities that are a reference of aesthetics and urbanism, that nevertheless they carry a big shadow behind them. This floating community has broken the paradigm of Danish society showing in an intrusive way the problems and realities of this society: The consumerism of some, the limited housing capacity of the city, the diversity of ways of inhabiting it according to its geographical qualities, among others. The «Fredens Havn» community have been a pioneer in the relationship of society with waste under the concept of DIY (Do it yourself) and the idea of static and “predictive” Urbanism, just being a group of structures capable of adapting to climatic and social conditions, mutating day by day as the way cells do it in their Autopoiesis processes.

Translated from Spanish by Marta Apablaza

Migration in the context of conflict and resource struggles: Experiences of Burmese migrants in Thailand 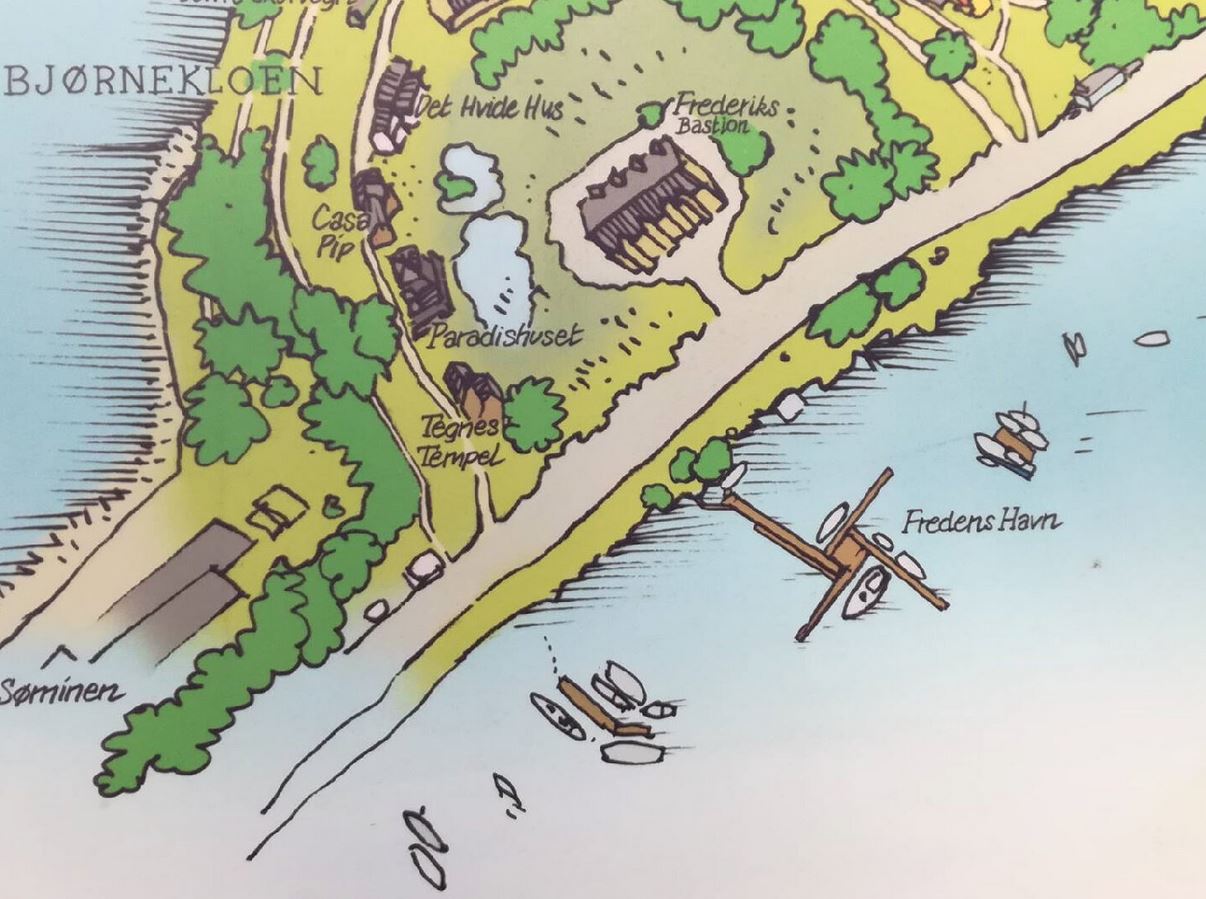