Helene Risør: Traces of a Danish anthropologist at the end of the world

Helene Risør, an academic from the School of Anthropology at the Catholic University of Chile, has spent more than ten years away from Denmark. At the University of Copenhagen, Helene Risør, finished her PhD in Social Anthropology, in 2010. Currently, the majority of her research revolves around the social and political life of one of the southernmost countries in the world, Chile.

“The foreign look” seems to be a recurring theme in the personal and professional life of Helene Risør, a Danish anthropologist based in Chile. She is currently an academic at the School of Anthropology at the Pontifical Catholic University of Chile – one of the most prestigious universities in the country.

Helene arrived in one of the most southern countries in the world as a student. She completed her undergraduate studies in Chile and returned to Denmark to pursue her master’s and doctorate in Social Anthropology at the University of Copenhagen. At the same time, she took her first steps in research as an assistant at the Research Department of the NGO “Dignity – Danish Institute Against Torture“.

Once installed in Chile, she prioritized her personal life, and her family – her Chilean husband and son. However, she soon began doing research in the areas of global politics and social and cultural history of violence in Latin America.

In recent years, she has been investigating “fear” as an actor or social phenomenon in the configurations of social and political relations, in Chile. Helene describes her recent research as understanding the “fear of the other”, and how, in a country with a history of a horrendous dictatorship, the “fear of certain political expressions can become a more open conflict,” she explains. The people tend to criminalize each other, in the Chilean society, rather than looking for structural explanations, which could explain their current situation.[1]

In other words, Helene’s work seeks to theorize politics from local practices and concepts, which are far from the formal centres of power: “I am interested in understanding how political languages ​​are changing, and how this modifies the politics. By this, I mean, in what way our manners of practicing day-to-day politics coexists and transforms more formalized practices of exercising citizenship”.

Specifically in Chile, Risør explores how the notion of danger is re-configured in a society that suffered under the Augusto Pinochet regime, one of the bloodiest dictatorships in the region.

According to the academician, in the Chilean society in the seventies, the danger was rooted in the “communist” character. This was due to the political and social context of the country, region, and the rest of the world, where communism as a global ideology was at its strongest. In 2019, Chile celebrates 31 years since their restoration of democracy and the concept of danger in the Chilean society transferred. Now, the danger is rooted in the character of the “flaite”, a male character, who is stereotyped to come from the margins of the city, young, poor and uneducated.

This research topic is subject to the “securitization” of the Chilean society. The concept refers to the moment when one accepts the necessity of taking extraordinary measures towards someone, in the name of welfare and security of the society. It should be noted that the researcher recently published an article on this topic, where she introduced the concept of “civilian victimhood”.

“In the post-dictatorship Chile, the concept of citizenship was forged along with the concept of a victim of political violence. From this last character we extracted characteristics that the contemporary Chilean society must protect. For example, the victim of political violence of the dictatorship in Chile prioritizes peace over revenge and justice. It puts co-existence first with a look to the future. A paradigmatic example of this ‘civilian victimhood’ is the former president of Chile, Michelle Bachelet, who was tortured and exiled in the regime of Augusto Pinochet, and when she later returned to Chile she lived in the same building as her ex-torturer”, says Risør.

For the academician, this concept of ‘civilian victimhood’ was transformed over the years to all Chileans who have been or may be victims of crime. “So to be worthy of participating in this new society and democracy, you have to be a victim or potential victim of crime,” Risør explains.

And she adds: “Specific groups are excluded, such as the ‘flaite’, eventually the ‘violent indigenous’ and all those social subjects, who claim slogans in a non-peaceful manner, are brutally excluded from the Chilean political community.”

“The interesting thing is that the victim can react to the attacks with extreme violence. The victim can beat the alleged criminals, exclude migrants, and act violently towards the indigenous groups. It is important to clarify that it is not a state or a violent citizenship, but rather this ‘violence’, which is conceived as reactive and as a protector of the victim citizens. This is a notion of citizenship, where the notion of law is not positive but rather, negative. We define ourselves as Chilean citizens through our ‘victimization’”.

‘To look through another’s eye’ is essential in anthropology, says Helene Risør. Her curiosity in the fear within societies was “undoubtedly fuelled by being a young Danish woman in a Latin American country, where her university classmates were frightened,” she says.

This ‘look through another’s eye’ has, since then, been captured in her research and has gone beyond the limits of the academy. Her research, ‘Interculturalism as treason’: policing, securitization, and neoliberal state formation in Southern Chile is about the Chilean police, called ‘Carabinero de Chile’ and the formation of intercultural patrols, which is, the incorporation of indigenous to the police force that represses the Mapuche people.

“This article has served as inspiration for a theater play “TREWA” that was performed in the traditional Catholic University of Chile theater in Plaza Ñuñoa. I always want my research to relate to the problems of the society and I try to transform it into an easier language for a wider audience,” she says. The play was written by the playwright, Paula González, of the company KIMUN, and was considered a success among the audience.

Notwithstanding having lived in Chile for several years, Helene Risør continues to have deep relationships of collaboration with researchers in Denmark. Until 2016, Helene was a postdoctoral researcher at the Danish Science Council administered by the University of Copenhagen.

In this context and as Principal Investigator of the Center for Indigenous Intercultural Studies of Chile, where Risør directs the line of research on “Citizenship, Difference and Conflict”, she has, previously, invited Danish researchers to participate as visiting professors.

“Last summer there was a visiting professor from the School of Anthropology from the University of Copenhagen.” Risør also organizes “Latin American Social Issues Summer School” (LASI), carried out in collaboration with the Universidad Católica del Norte and Stanford University, where Danish professors are invited every year.

“In that sense I think that my presence works as a bridge of arrival and collaboration with researchers from Danish institutions,” she concludes.

Marta Apablaza is a freelance science journalist based in Santiago, Chile

[1] Helene explains more about this topic in her research paper “Interculturalism as treason: policing, securitization, and neoliberal state formation in Southern Chile”

Kenya: The troubles of a science PhD from the West

Helene Risør’s research of the indigenous people in Chile inspired the Chilean producer Paula González Seguel to create the theatre play “TREWA – State, Nation or the Spector of Treason”. The theatre play was a co-production between KIMVN theatre group, and the Chilean Centre for Intercultural and Indigenous Studies (CIIR). The theatre play is inspired by the people of the Wallmapu area, in Southern Chile. This area is also known as Mapuche Territory, an indigenous group who has historically been repressed by the Chilean government. TREWA is a fictional story, however, through the anthropological knowledge about the indigenous people, Helene Risør has been an informational inspiration, through her anthropological investigations. 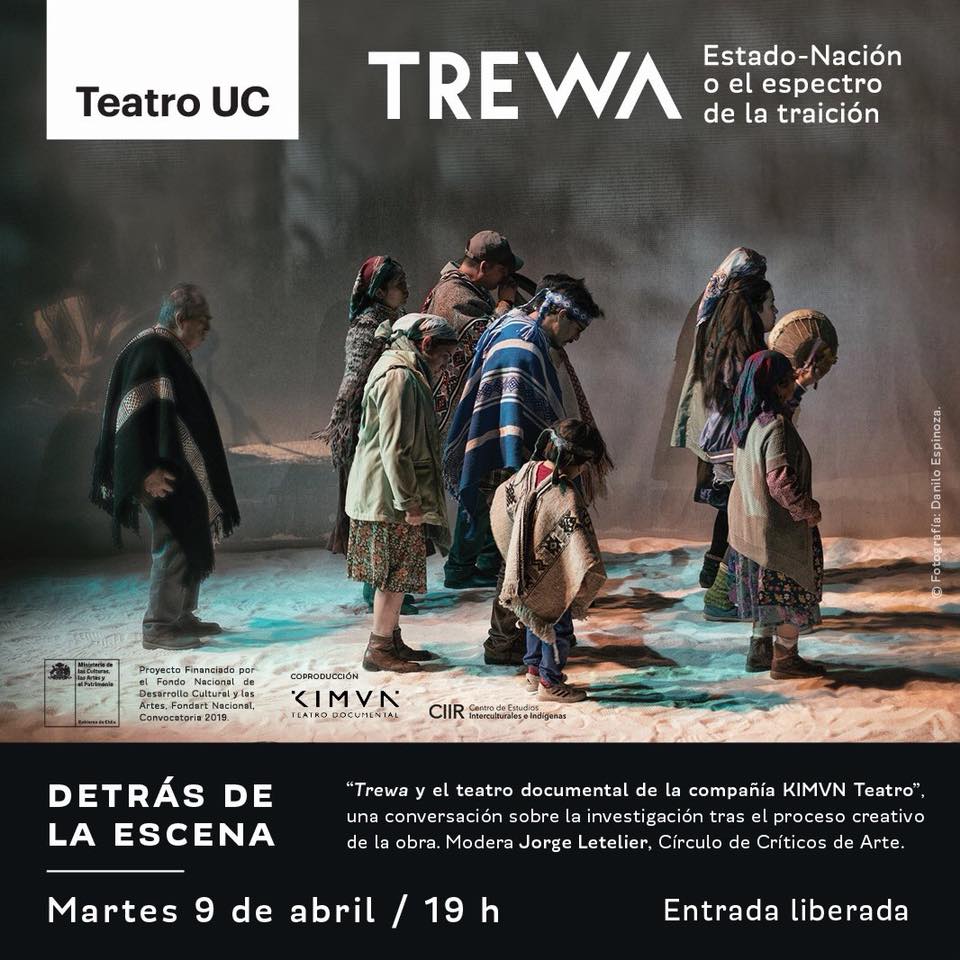 The short film below was inspired by Helene Risør’s research that investigates the state of an area after a revolution has finished. The film and her research raise the question: What happened with the social practices, and the surroundings of the railway station in San Bernardo, Chile? Helene Risør intends to discover the memories, nostalgias and fears the sites evoked.

Produced as part of the research project: “Revolutionary Ruins: State Formation, Subjective and Infrastructure Projects in Chile and Bolivia"